ON TRACK with David Scoggan – King of The ‘Burg 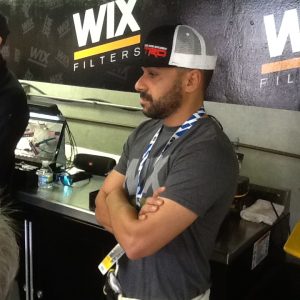 Only one driver entered for this year’s NHRA Chevrolet Performance U.S. Nationals has a shot at a three-peat and that’s the reigning Mello Yello Funny Car World Champion J.R. Todd.

Todd made a visit to the Indianapolis Motor Speedway in May, visiting the Dryer & Reinbold Racing garage through shared sponsor WIX Filters and sampled the cockpit of Sage Karam’s Indycar. The high point of his morning was a quick ride around the IMS oval in a two-seat Indycar driven by motorsports icon Mario Andretti. Coincidentally, J.R.’s given name is also Mario, as in Mario Todd, Junior.

Growing up watching his father race motorcycles, young J.R. also cultivated a passion for Lawrenceburg Speedway, a high-banked 3/8-mile dirt track located in his southeastern Indiana hometown that features a regular diet of sprint car races. Though he loves dirt racing and his close friends with the likes of Rico Abreu, Todd has no desire to turn left, stating flatly, “I’ll leave that to those guys!” There is clearly no trace of the “Danny Ongais gene” in J.R. Todd, because he only wants to go straight — to the winner’s circle.